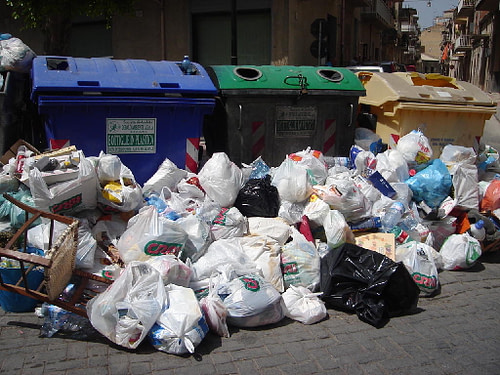 (Reuters) – The European Commission asked the EU courts on Wednesday to impose huge fines on Italy for not cleaning up hundreds of illegal waste landfill sites.

It said the country had made only partial progress in addressing a chronic problem.

The EU’s executive asked the European Court of Justice to impose a lump-sum fine of 56 million euros ($73 million), plus a daily fine of 256,819 euros until Italy complies with a 2007 ruling ordering it to resolve the situation.

“While some significant progress has been made, it is clear that problems persist in almost all Italian regions. The court ruling of 2007 has not been complied with, and the Commission has therefore decided to take Italy back to the court and ask for fines,” the Commission said in a statement.

Under the 2007 decision, Italy was ordered to clean up 255 landfill sites, 16 of which contained hazardous waste, but has only put in place plans to clean up 132 of the sites, the Commission said.

The ECJ will have to take the final decision on fines in the matter.

Italy’s garbage crisis has been seen most dramatically in and around its third largest city, Naples, which has been submerged with piles of rotting rubbish on several occasions in the last five years, creating a major political issue.
However, the problem is not confined to Naples, and recently the Lazio region around Rome has also been struggling to keep its streets free of trash.

Local residents resist the construction of incinerators and regions with efficient trash disposal are reluctant to have waste transported to their own territory, resulting in a string of stop-gap solutions often involving illegal land-fills. The Camorra — the Naples version of Sicily’s Mafia — is heavily involved in the transport and disposal of waste. Along with political ineffectiveness and corruption, this has meant Naples has failed to get to grips with a problem that was first recognized as an emergency 19 years ago. Illegal dumping and burning is blamed for poisoning the soil, water and air of large zones around the base of Mount Vesuvius.

This website uses cookies to improve your experience while you navigate through the website. Out of these, the cookies that are categorized as necessary are stored on your browser as they are essential for the working of basic functionalities of the website. We also use third-party cookies that help us analyze and understand how you use this website. These cookies will be stored in your browser only with your consent. You also have the option to opt-out of these cookies. But opting out of some of these cookies may affect your browsing experience.
Necessary Sempre abilitato
Necessary cookies are absolutely essential for the website to function properly. These cookies ensure basic functionalities and security features of the website, anonymously.
Functional
Functional cookies help to perform certain functionalities like sharing the content of the website on social media platforms, collect feedbacks, and other third-party features.
Performance
Performance cookies are used to understand and analyze the key performance indexes of the website which helps in delivering a better user experience for the visitors.
Analytics
Analytical cookies are used to understand how visitors interact with the website. These cookies help provide information on metrics the number of visitors, bounce rate, traffic source, etc.
Advertisement
Advertisement cookies are used to provide visitors with relevant ads and marketing campaigns. These cookies track visitors across websites and collect information to provide customized ads.
Others
Other uncategorized cookies are those that are being analyzed and have not been classified into a category as yet.
ACCETTA E SALVA
Caricamento commenti...